The north of Iceland is an exciting place to discover. With each place we went, we learnt something new or tried something unique.

Leaving Heiðarvegur behind, we headed to Lake Myvatn, which is popular for its nature baths, tuff ring volcano and geothermal activity.

The most powerful waterfall in Europe. According to our map, the description says this is a must-see. There are two entrances to the waterfall. Since we were traveling counter-clock wise, we headed to the waterfall through its East entrance.

Contrary to other waterfalls we have seen, as we drove along, there was no greenery, no trees or plants. It was just long stretches of gravel road. We couldn’t drive very fast, hitting 70km/h at most for the fear of stones hitting the windscreen. That’s how stony the area was. Along the way I was starting to doubt if there was ever going to be a waterfall. After driving for more than an hour on the gravel road, we saw a sign towards Dettifoss. We learnt that the area around Dettifoss is considered to be the driest in the whole of Iceland. I guess this explains all the lack of greenery and wildlife.

When we reached, I understood why it was the most powerful waterfall in Europe. We were at a far distance and yet we could feel the power of the waters spewing down. If you do visit this place, remember to wear good shoes, have a walking stick and hat.

A short (45 minutes) drive out from Dettifoss, is the Krafla Viti Crater. Unfortunately, when we got there, the crater was closed because of some volcanic activity, according to the warning signs. We saw however, brave souls who stopped their car at the entrance and trekked their way in. So here’s a picture of the crater from afar.

What is Iceland without a visit to the geothermal baths? Myvatn Nature Baths was less pricey as compared to Blue Lagoon and most people who were at the baths were locals. It wasn’t very crowded and we took our own sweet time at the baths. This place provides good changing room facilities too. A good alternative to the Blue Lagoon.

We definitely recommend this place if you want to avoid the tourist crowd and take your time to enjoy the scenery. We forgot to take pictures because we were too excited to soak in the water.

The north is a popular summer travel destination so most hotels and AirBnB were fully booked when we tried arranging for one in late April. Still, we managed to find Vogahraun guesthouse through Booking.com. This guesthouse has 2 different kinds of lodging. There were the usual rooms with beds and toilets attached and an open space camping site for camper vans. The guesthouse provides a common cooking and washing area and breakfast is provided.

Point to note: We learnt that in mid-June, Lake Myvatn becomes swarmed with midges, a black irritating fly that sticks to every part of you. The fly stuck to us wherever we went and even swarmed into the car the moment we opened the car door.  If you do intend to visit this place in June, remember to bring along your insect repellent and head net.

From Lake Myvatn, we headed to Siglufjörður, the former herring capital of Iceland. 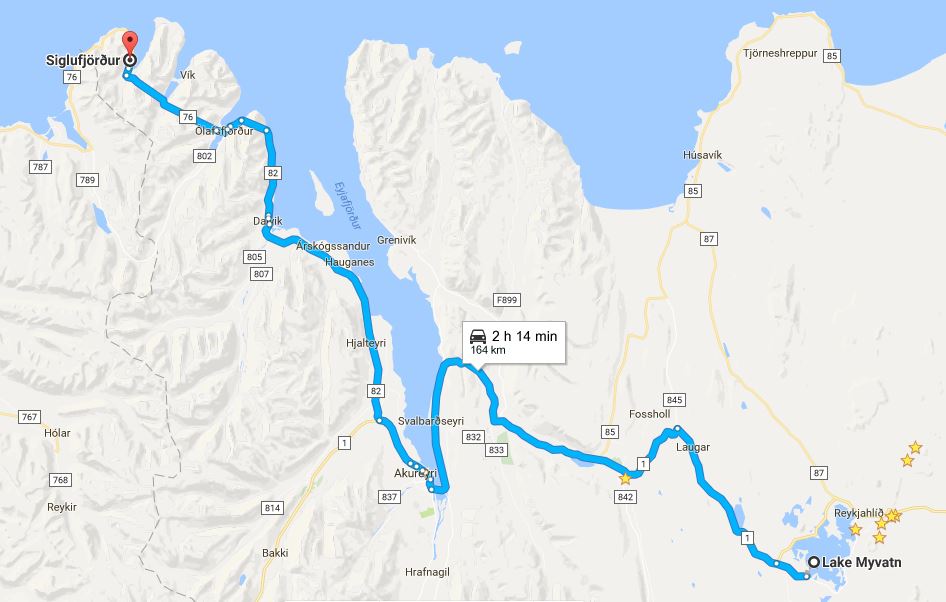 Góðafoss: One of the most spectacular waterfalls in Iceland.

We passed by the largest town outside of Reykjavik and had a picnic at a resting area overlooking the whole town. It is one of the better towns outside of Reykjavik to refuel, stock up on supplies and grab something nice to eat. They have quite a number of cafes, restaurants and supermarkets too.

Mini waterfall! Along the way, we passed by a couple of pretty waterfalls. We couldn’t resist the beauty of it and stopped by the road side to take pictures.

This was once the herring capital of Iceland. In the past, this little town exported 200,000 barrels of salted herring to European markets like Norway, Sweden, Denmark, Finland, Russia, Germany and the US, accounting for 25% of Iceland’s total export earnings. Talk about money rolling in from the 1920s to 1960s. Sadly, because of greed and environmental unawareness, herring was over-fished and suddenly the fishes just stopped going into Icelandic waters. It became a ghost town overnight, with companies pulling out and investing in other places. This story is another reminder to everyone just how vulnerable Earth’s natural resources are.

With the fishing industry gone, the town relied on tourism. This town is known for its award-winning Herring Era Museum which we visited. The museum was once a processing factory. Much of the layout inside the buildings were retained as it was. It was as if we went back in time to relive how workers lived, socialized and worked. During the peak season, about 50 females lived in a small room with 8 beds. Imagine how squeezy it would be. Another building showcased fishing vessels that were used during the hayday.  I must say, the vessels were kept and maintained in pristine conditions.  You can climb on board one of these vessels and took a look inside at how fishermen stored and categorized herring on board.

We were told to try out the specialty in town, herring. We found Kaffi Rauðka serving herring as their specialty together with shark meat. It was our first time eating shark meat and honestly, we didn’t like the taste of it. It tasted like chewing meat soaked in hard liquor. But it was still a good once-in-a-lifetime experience. 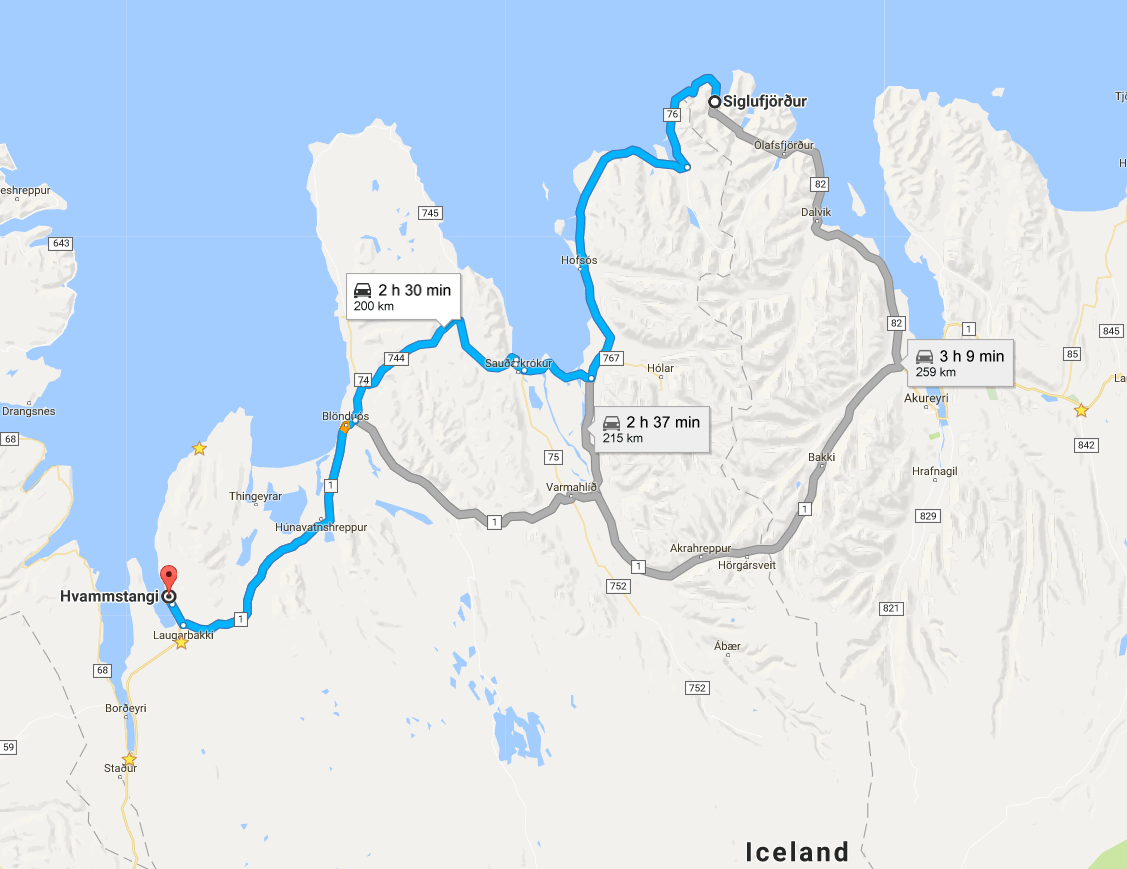 We drove to the small town of Hvammstangi for a night’s stay. Shops in this town closed pretty early. We reached the town at about 6.30 p.m. and it was almost like a ghost town. The only N1 petrol station in town was closed as well. Rather than finding food, we were more anxious to get to the location of our stay. We took about 30 minutes to finally realize that there was a small sign board pointing to Hvammstangi Cottages.

This place may be hard to find, but when we reached, we loved how sparsely separated the cottages were. Most of all, not to mention the view!

The cottage has a unique way of checking-in. There was no front desk. Just a message at the door to teach you how to retrieve your keys to the cottage. Cool huh.

The cottage pretty good facilities in good condition such as the cooking hobs, a mini refrigerator, and heated bathroom.

This trip up north was like going on an educational trip. We learnt so much about the history, economic success and failures of Iceland. And it made us reflect on how vulnerable Earth’s natural resources are. Time to do our part to take care of Mother Earth yo!

8 things to do in Copenhagen, Denmark

What to do in Tebrau city: Short Getaway in Malaysia